The US Meat Export Federation concluded its spring conference Friday, May 27, 2022 in San Antonio. The three-day meeting discussed a number of key issues for US exporters while updating members on promotional activities for US pork, beef and lamb in a wide range of international markets.

Thursday’s general session focused on the U.S.-China agricultural trade relationship, including an in-depth analysis of market access gains for U.S. beef and pork from the trade deal and economy of phase 1 of 2020.

The session’s guest panelist was former Iowa Governor Terry Branstad, who was at the forefront of the tumultuous negotiations that led to the deal, as he served as US Ambassador to China during the Trump administration. . Branstad was joined on the panel by Joel Haggard, USMEF’s senior vice president for Asia-Pacific, based in Hong Kong.

Offering an overview of the talks, Branstad admitted initial concerns about efforts to engage China more aggressively in trade.

“My respect for Ambassador (Robert) Lighthizer grew through the process,” Branstad said, referring to the U.S. Trade Representative at the time. “He was very focused and worked very hard to establish a personal relationship with the chief negotiator on the Chinese side, Liu He, who has the ear of President Xi Jinping. hit.

Following the adoption of the phase one pact, Chinese purchases of American agricultural products reached record levels, although still below the objectives set out in the agreement. Now, two years after the deal took effect, Branstad said Chinese consumers remain committed to American food products because they value quality and safety.

Haggard noted that U.S. growers shouldn’t worry too much that phase one purchase targets haven’t been met. With better market access, private entities in China have sharply increased their imports of American agricultural products based on their needs – which Haggard sees as the preferred route to increase trade.

“Would we in the meat business have wanted Chinese government buyers to go out and buy products just for the purpose of buying them and disrupting the market?” asked Haggard. “It does not serve the orderly development of the market.”

Haggard hailed the expanded opportunities resulting from the phase one deal, which has seen China quickly rise to third place among U.S. beef export destinations, behind South Korea and Japan. While the surge in U.S. pork exports to China in 2020 was largely due to the impact of African swine fever on China’s domestic pork production, phase one allowed many more pork producers and US processors to take advantage of China’s increased demand for imported pork.

The name ‘Phase One’ implies there is unfinished business to be resolved in a second round of U.S.-China trade talks, but Branstad noted there are significant hurdles to opening up. phase two negotiations.

“That will be the hardest part because the Chinese government loves to subsidize its state-owned enterprises,” he said. “It’s a distortion of the market and it’s something we wanted to fix, and frankly that’s what wasn’t done in the phase one agreement. I think that’s going to be tough to do, and the Biden administration hasn’t really shown the appetite to go for it. »

Friday’s closing session featured a panel discussion focusing on USMEF’s marketing initiatives at traditional retail venues in select markets. The rapid expansion of modern supermarket chains has created enormous opportunities for American red meat internationally, and the American industry is taking advantage of this through numerous partnerships, promotions and tasting demonstrations. But around the world, millions of consumers still favor traditional environments such as wet markets and butcher shops, and there are significant opportunities for growth in this sector.

USMEF Director of Business Analysis Jessica Spreitzer moderated a panel discussion with USMEF Mexico Director of Marketing Lorenzo Elizalde, USMEF Philippines Representative Dave Rentoria, and USMEF Philippines Representative Maria Ruiz. ‘USMEF Colombia. Spreitzer acknowledged that the pandemic has accelerated the global transition of food sales to modern retail, but stressed that traditional venues continue to hold their own in an increasingly competitive retail space. In fact, according to Euromonitor International, the traditional market sector is a $3 trillion business that accounts for 41% of global grocery sales, and Spreitzer argues that these markets still dominate sales in many South Asian countries. -East and Latin America.

Rentoria explained that with domestic production affected by African swine fever, the Philippine government recently lowered pork import tariffs to attract more imported pork and stabilize supplies. American pork was traditionally used as a raw material for further processing in the Philippines, but is now sold in significant volumes at food outlets and traditional wet markets. The US pork industry has a great opportunity to increase demand through this channel, especially as these sites are better equipped to process frozen pork. USMEF implemented a three-phase program to gauge Filipino consumer perceptions of imported pork and US pork in particular, and to increase sales through direct consumer outreach.

Ruiz spoke of the growing butchery sector in Colombia, where around 40-50% of imported meat is sold. Butcher shops fill a growing need between traditional wet markets and modern retail, she explained, and this provides an opportunity to work closely with major importers who own or are affiliated with butcher shops. The USMEF Butcher Shop program is a relationship building strategy developed to improve many operational aspects with the goal of increasing pork and beef sales in the United States. The program has three distinct phases—diagnosis, planning, and execution—during which USMEF guides these stores on ways to improve merchandise and promote American pork and beef products. The program has helped increase sales of red meat in the United States in several places and more stores are looking to participate.

Elizalde described the new product development approach that USMEF-Mexico has implemented in retail to better position American pork as a value-added product. Elizalde discussed several of the new products that USMEF has helped develop and promote with targeted Mexican processors. New products are promoted in traditional markets through product sampling, use of a USMEF mobile grill and kitchen, and on a wide range of social media platforms.

The conference kicked off Wednesday with presentations from USMEF President and CEO Dan Halstrom and keynote speaker and acclaimed author Peter Zeihan. More details on the opening session are available on line.

In addition to general sessions, standing committee meetings provided an opportunity for USMEF members to receive updates on critical issues specific to their sector. Breakout sessions for the USMEF Swine and Allied Industries Committee, the Beef and Allied Industries Committee, and the Feed Grains and Oilseeds Caucus provided producers with market-specific information on how their investments in USMEF marketing programs are used. Committee members also received updates on the competitive landscape in key markets, as well as details on the impact of rising input costs for growers around the world and the effect of rising inflation on consumer spending. Members of the USMEF Exporters Committee reviewed a wide range of trade barriers and market access impediments, while receiving updates on port congestion and other maritime and logistical challenges.

USMEF members will then gather at the organization’s annual strategic planning conference, to be held November 9-11, 2022 in Oklahoma City. 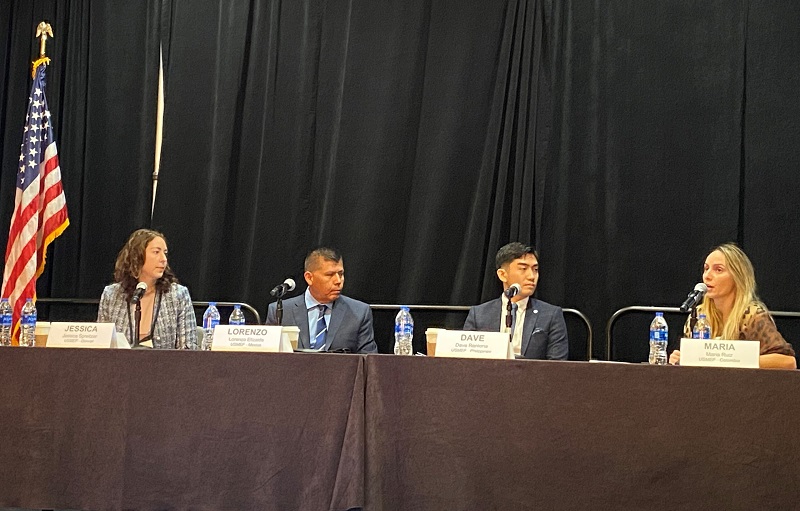 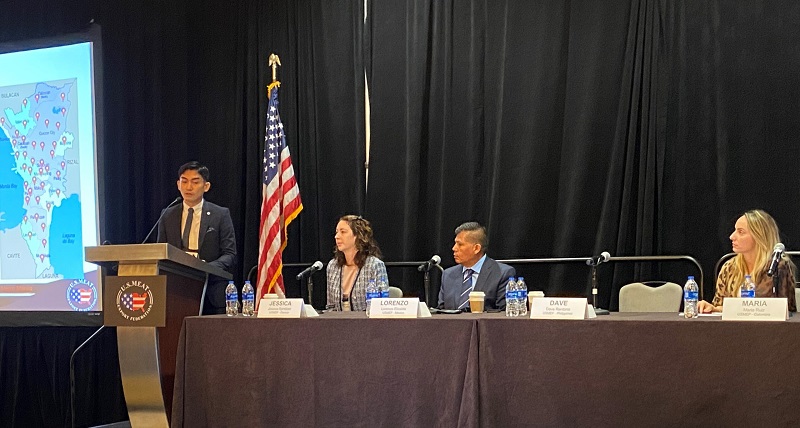 Dave Rentoria, USMEF representative in the Philippines, details efforts to promote American pork in Philippine wet markets. Other panelists (from left to right) are moderator Jessica Spreitzer, director of economic analysis for USMEF, Lorenzo Elizalde, director of marketing for USMEF in Mexico, and Maria Ruiz, representative for USMEF Colombia.