Spaniards went to bed on Sunday knowing with certainty that an era is over, but not knowing what the new era will look like. Every time since 1978 that Spaniards have gone to the polls, they have gone to bed knowing that the most voted candidate would be elected prime minister and enjoy a stable majority in parliament to govern for the next four years.

But times have changed. With 28% of the votes and 122 seats, Prime Minister Rajoy and the Partido Popular (PP) won the elections. But they are well below the threshold of 176 seats needed to form a government. And they are unlikely to achieve this even by going to the new centre-right Ciudadanos party, as even the combined 162 seats these two parties might muster are still insufficient. Rajoy may therefore have won the elections, but it is far from certain that he can lead his party to government a second time.

This change of era is due to the fact that the PP and the socialist party PSOE, which have exchanged power between them since 1982, won only 50% of the votes, whereas in the last election before the crisis (2008 ), they received a combined 84 percent of the vote.

It was in the space left by the two main parties, which for the first time in Spanish democracy both lost votes, that two new parties, Podemos and Ciudadanos, were able to insert a very attractive proposal for change. Both succeeded in reviving democracy with new and attractive language capable of attracting disaffected voters and young voters to politics. The rise of both parties, and especially Podemos’ incredible surge in the polls over the past week, is the real story on Sunday night. 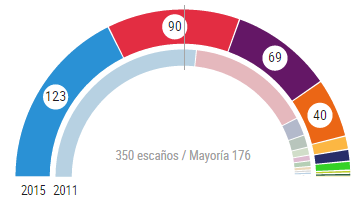 Where does this lead us? Although there is no Conservative government in sight, the prospects for a leftist bloc are also unclear. After four years in opposition, the Socialists are even lower than their disastrous record of 2011. The Socialists might like to try to form a government with Podemos (together they reach 160 seats and they could collect some abstentions to form a government ). But Podemos (with 20% of the vote and 69 seats) sees the Socialists as a losing party that it wants to replace, not revive, after such a heavy defeat. Already on Sunday evening, the leader of Podemos, Pablo Iglesias, drew a number of red lines for him so that he could join the Socialists in government, including a constitutional reform, which will be difficult for the Socialists to accept.

Thus, as long as the old system is gone, a new one will not be easily formed. Political parties and Spanish leaders will have to discover a new language of negotiation, agreement and accommodation. A new chapter opens.

José Ignacio Torreblanca is professor of political science at the UNED University of Madrid and head of the ECFR office in Madrid. He is the author of a book on Podemos (“Storm the Heavens”)

The European Council on Foreign Relations does not take a collective position. ECFR publications represent the views of its individual authors only.